Green Africa Youth Organization participated in Environment 360’s collaboration with Adventure Junkies for their first ever annual float your boat fundraiser. The event was graciously hosted at the Lakeside Marina Park on Saturday. The initiative was to educate people on sustainable methods of waste management and how to make money from plastic waste. The event saw our very own GAYO, Adventure Junkies, UT Bank and Trotro Diaries battle it out on the lake to be winners. Prior to the day of the event, each of the competing teams was assigned to make boats using empty water bottles in a bid to create awareness of the plastic waste menace in the country.  In addition to the awareness creation, it is also hoped that the float your boat campaign will expose people to creative and sustainable uses of plastic waste. 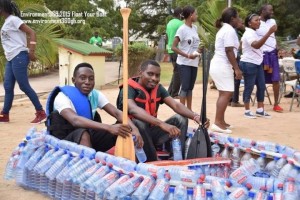 1. GAYO team getting ready to float

Crafts such as waste bins and miniature statues were made also using empty plastic bottles. In addition to the lake competition, there were other team building activities like volleyball and football.

Funds raised from this event will go to support the community programming projects of Environment 360 which include expanding the national sanitation day with public schools, as well as creating five targeted education programs that teach children waste segregation habits, gardening skills and leadership skills that empower them to be waste ambassadors in their communities.

Little by little, Environment 360, just like GAYO also hopes to inspire people to find creative ways to reduce or reuse their own waste, especially recyclable waste and also see plastic waste as more than just #borla.

SHIFTING THE PARADIGM OF SUSTAINABILITY

Save Our Oceans: SAY NO TO PLASTICS