The event commenced with a welcome address from Joshua Amponsem (Tunza Eco-Generation Ambassador), Nat Martin (Canadian Environmental and Human Rights activists) and Gideon Commey (Founder, Ghana Youth Environmental Movement). A press release article on coal power was read out to the general public, following which we took questions from the media and public concerning their understanding and awareness on coal power plants.

Most of the questions were geared towards economic stability which will arise if the country possess a constant power supply. However, this argument was disputed by Joshua. He iterated that, power generation from coal is not cheap as presented. Coal waste – particulate matter from the power plants causes health and ecological hazards that could cost the country twice the amount being spent on coal power generation. He also furthered to say, Ghanaians are hungry for constant power supply but the solution is not coal but #renewables.

Media houses present at the event asked series of questions concerning the position of the country during COP21 and the current quest to introduce coal into the country. Climate advocate, Gideon Commey, responded that the country’s decision to bring coal to Ghana contradicts with the commitment of global leaders to fight against global warming and climate change. 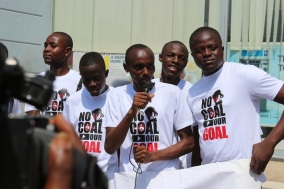 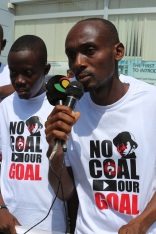 He mentioned that the President of Ghana, HE John Dramani Mahama, should be mindful of his role as the Co-Chair of a group of 16 influential global figures supporting the UN in achieving the Sustainable Development Goals (SDGs) by 2030.

When asked by the media about the next step of action if government does not heed to the protagonism of environmental activists for solar instead of coal, Joshua Amponsem responded that, activists will travel to the proposed coal project community and educate the community on adverse effects of the project they about to receive. Joshua stressed that the ecological impacts of coal fired plants were so high and therefore, as passionate environmental activists, they will push to the limit until renewable energy is considered as the best alternative to fixing Ghana’s energy crisis.

The event ended with a loud campaign song led by guitarist and environmental enthusiast, Seyram Gh, who composed the song during our walk for solar campaign last year. 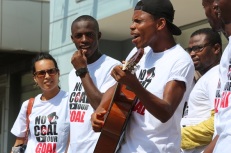 Quote of The Month

“One of the first conditions of happiness is that the link between man and nature shall not be broken.”
—Leo Tolstoy