Disaster Risk Reduction (DRR) activities are to reduce the risk and losses in lives and livelihoods, as well strengthen the socio-economic vulnerabilities of mankind. These risks could be caused by natural or artificial hazards. Globally, the Sendai Framework for Disaster Risk Reduction (SFDRR) provides guidance on how to significantly reduce disaster risk. In Africa, the Programme of Action (PoA) guides different stakeholders in DRR. Both SFDRR and PoA recognize the state as leaders in the implementation, follow up and review of the document. In addition, both document recognize children and youth as active and strong stakeholders in DRR. However, they can only be able to fully fulfil their role when they are empowered, otherwise, their inherent vulnerabilities will make them passive actors in DRR.  For Africa, this is especially very important as current estimates suggests that, out of a population of 1.2 billion inhabitants, 60% are below 35 years.

Regional Economic Committees (RECs) are tasked with raising awareness of the PoA to member states, since the PoA provides policy and strategy guidance to member states in their national DRR strategies as state actors. In an orientation workshop on the PoA, that took place from 4th to 6th March 2019 in Addis Ababa, Ethiopia, RECs presented the status of the implementation of the PoA in their jurisdiction.  Apart from the Economic Community of West African States (ECOWAS), all RECs gave progress made in their region as well as challenges and recommendation needed for effective implementation, follow and review of the PoA. Out of the presentations made, it was only the Southern African Development Community (SADC) that acknowledged how the youthful population of Africa was an opportunity to significantly reduce disaster risk. The East African Community (EAC) indicated that they had a youth policy to engage youth in DRR but admitted the policy was weak. IGAD on the other hand indicated that, although the region engaged youth, it had no youth DRR policy. Clearly, institutionalising youth participation for meaningful engagement is lacking but none of the delegates solicited for support in either creating or strengthening their youth policy in DRR in the recommendation part of their presentation. However, the honourable delegate from Liberia, the Executive Director of the National Disaster Management Agency (NDMA), Honourable Henry O. Williams set the tone in the meeting on the valuable contribution young people make to DRR. He clearly articulated the vital role young people play in DRR, especially in the response phase when a disaster strikes. His statement was further supported by the honourable delegate from Ghana; Mr Kofi Koranteng Abrokwa, Director of Training at the Headquarters of National Disaster Management Organisation (NADMO). He shared with plenary the exciting news about Ghana’s new DRR youth policy which showed the state preparedness to work for and with young people.

As a young DRR professional, I could not help but notice that, the common challenge in all presentations made, was about inadequate finance. The PoA indicates that at least 2% of the national budget should be allocated to DRR activities. However, due to fiscal and political realities, monies allocated from national budget to DRR are usually not enough. But it is possible to achieve this feat and even go beyond as Ghana is an example. In Ghana, about a 100 million dollars is allocated from its annual national budget to DRR. However, the allocation goes beyond climate exacerbated disasters to include staff salaries. Ghana has been able to achieve this even without a Disaster Risk Financing (DRF) Strategy. Kenya is the only country in Africa that has been supported by World Bank to have DRF policy. Having a DRF policy can support member states to consider going beyond existing traditional financing mechanisms to innovative financing mechanisms. This broadens the finance options of stakeholders in reducing disaster risk.

For non-state actors, such as youth, we are delighted that in the last Africa Risk Reduction Platform (AfRP) in Tunisia 2018, member states agreed to establish a 15 member African Youth Advisory Board (AYAB) to institutionalise youth contribution in DRR for meaningful engagement. We believe our reflections on lessons learnt in engaging in DRR thus far and the challenges we have encountered will inform the recommendations for a successful establishment of a youth-focused and youth-led advisory board. The opportunities that AYAB presents are many and young people are poised to maximise them.

In the past, a draft of the Africa Position to the Global Platform is shared by the Africa Working Group (AWG) on DRR to member states for their inputs and comments. The final document is then shared as Africa’s Position at Global Platforms. However, in this orientation meeting, the process was reversed. Member’s states and non-state actors were given guidelines to develop the first zero draft for input and comments by the Africa working group for disaster risk reduction. The proposed AYAB should feature prominently in the 2019 Africa Position to the sixth Global Platform for DRR taking place in May 2019 in Geneva. It will also be a step in the right direction to equip the AYAB with the necessary resources to be able to effectively carry out the vision of the board. Otherwise, it will become another big white skeletal elephant in Africa’s cupboard.

At the end of the day, a fact that should not be lost is that young people can only become the agents of change we all earnestly desire if they are empowered and prioritised. Meaningful youth engagement in DRR on the African continent has come a long way since the sixth African Regional Platform on DRR in Mauritius. For the past two years, youth have moved beyond making plenary stakeholder statements to contributing expert advice to DRR working groups at all scales because youth are also ‘professionals’. African youth are ready to sustain their contribution to the resilience dividend for sustainable and inclusive societies. 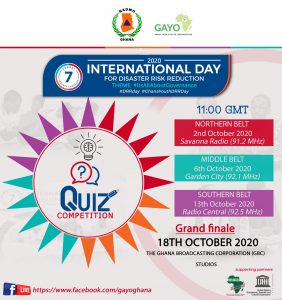